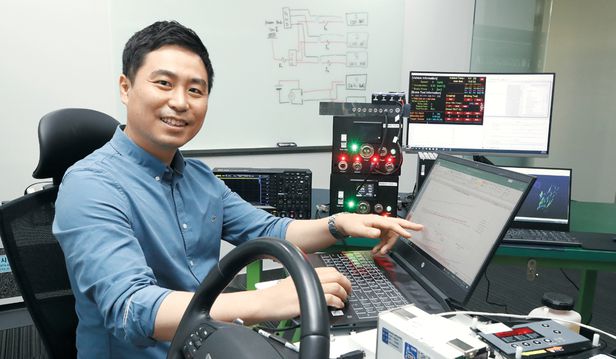 ﻿The central research center of Autonomous a2z, an autonomous driving startup in Anyang, Gyeonggi Province, on the 22nd. On one side, a monitor was installed on a seat that was shaped like a car driver's seat. It is a monitor that checks the status in real time by connecting remotely to autonomous vehicles that are being piloted in areas such as Sejong City. “Self-driving cars are meaningful when 100% safety is guaranteed,” said Han Ji-hyeong, 41, CEO. All of the employees are wrapping their heads up for that,” he said.

There are about 200 autonomous driving cars on Korean roads that have received permission from the Ministry of Land, Infrastructure and Transport to move around without the actual driver. Among them, a2z has 21 units, the most in Korea. The test driving distance of a2z autonomous vehicle is 186,622 km, which can make 230 round trips between Seoul and Busan, making it the fifth in the world after Google Waymo, GM Cruise, Pony AI and Amazon Zook.

CEO Han was a researcher in charge of developing autonomous vehicles at Hyundai Motor Company. The IONIQ autonomous driving car that Hyundai Chang Chairman Jeong Eui-sun rode at CES, the world's largest IT exhibition in 2017, and the NEXO self-driving car that President Moon Jae-in test-drives at the Pyeongchang Winter Olympics were all the work of Han and his colleagues. He said that he decided to "focus on practically usable technology" when he left Hyundai Motor, where he had worked for 11 years in 2018 and founded a2z. The name of the company a2z also reflects the will to complete all technologies from A to Z, such as recognition, judgment, and control capabilities for autonomous driving, first.

The a2z’s autonomous driving car rides with the driver in case of an emergency, but travels on a set route almost without driver intervention. CEO Han said, "Since we have conducted the most test runs in various parts of the country, such as Seoul, Sejong, Gwangju, Ulsan, and Daegu, related data has been accumulated for a long time, and we have been able to continue upgrading our autonomous driving technology." Thanks to this technology, Kakao Mobility started strategic investment in a2z, and telecommunication companies such as KT also selected a2z as their 5G smart city R&D partner.

The goal of a2z is not the mass-produced self-driving car that automakers such as Tesla and Hyundai are targeting. Its strategy is to develop special-purpose autonomous vehicles that operate at speeds of less than 50 km/h, such as vacuum cleaners, courier trucks, and shuttle buses, and settle into the market first. “We will aim for a niche market for autonomous vehicles,” said CEO Han. Local governments that are already promoting smart cities have entrusted a2z to the demonstration project for special-purpose autonomous vehicles. As he was also in charge of the demonstration project of a large company, the sales from 1.3 billion won in 2019 increased to 5.2 billion won in 2021, a fourfold increase.