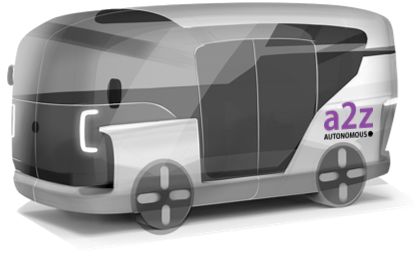 The picture is a rendering scene of an unmanned moving object in cooperation with KT and Autonomous a2z.

KT announced on the 16th that it would expand its participation in autonomous driving demonstration projects with Autonomous a2z, a company specializing in autonomous driving platforms.KT and Autonomous a2z will develop an autonomous driving mobility platform and control system on advanced roads based on networks such as 5G and LTE and V2X (Vehicle to Everything) communication. In particular, the two companies aim to achieve level 4 or higher fully autonomous driving, which enables autonomous driving within a limited complex.KT is developing technologies that enhance the safety and efficiency of autonomous cooperative driving, such as high-precision localization (RTK, Real Time Kinematic) and LDM (Local Dynamic Map) that can provide detailed lane-by-lane routes and information along with infrastructure such as 5G/LTE networks. Integrate to the control platform. This will make it possible to provide richer data to autonomous vehicles.In addition, Autonomous a2z will develop small and medium-sized mobility platforms based on the ‘a2z solution’ that utilizes LiDAR, a sensor that detects distance using light. This platform is used for shuttle buses, courier and delivery vehicles, and personal means of transportation with the goal of eco-friendly, high-efficiency, and miniaturization.In particular, the key to this cooperation is to develop 5G terminals specialized for vehicle communication and apply them to unmanned mobile devices. Ultimately, the vehicle communication module that reflects the government's V2X standardization trend will be applied as an embedded (embedded) method.Based on this, the two companies will actively cooperate with the government and local governments such as Anyang City for autonomous driving pilot projects. In addition, it plans to receive traffic data such as real-time signals, traffic flows, and unexpected situations from traffic information centers for each local government linked with the ITS/C-ITS infrastructure and use them to determine the driving of moving objects.On the other hand, KT and Autonomous a2z are planning to build an autonomous shuttle bus within the Air Force Wing in 2021 through the 'MEC (Mobile Edge Computing)-based 5G convergence service in the public sector' project of the Korea Intelligent Information Society Agency. completed in December. In addition, as the two companies are cooperating in various ways, such as the Pangyo autonomous driving shuttle bus business, they plan to continue to cooperate in various autonomous driving demonstration projects.

KT's AI Mobility Business Team Director Choi Kang-rim said, "The expectation for newly produced autonomous driving unmanned mobility through this cooperation with KT and Autonomous a2z is very high." It will contribute to the improvement of the mobility welfare of the Korean people by unmanning the back,” he said.