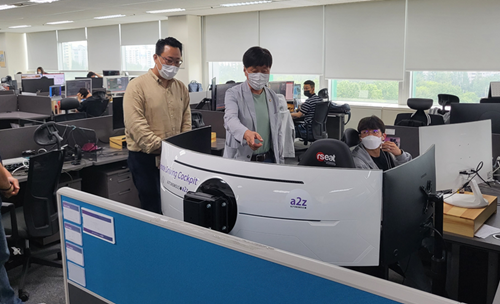 Korea Institute of Startup and Entrepreneurship Development announced on the 6th that it had visited Autonomous a2z, which develops autonomous driving mobility solutions that have been verified through real-road driving on the 5th, and listened to their difficulties.

In May, Autonomous a2z completed registration in the National Highway Traffic Safety Administration (NHTSA) Voluntary Safety Self-Assessment (VSSA). The U.S. government recommends that companies developing level 3 to 5 autonomous driving technology submit a voluntary safety self-assessment (VSSA). So far, global leading companies such as Apple, Waymo, BMW, and Ford have completed their safety self-assessment. Autonomous a2z became the 27th listed company in the world.CEO Han Ji-hyeong cited ‘empirical environment for the completion of new technology’ and ‘lack of information and experience on obtaining global licenses’ as the most difficult difficulties for high-tech startups with innovative technologies.

New technologies often do not have global standards or certification and licensing systems, or are newly established. Acquisition of long-established standards or certifications and licenses can be obtained relatively easily through collaboration as there are companies with various information and experiences. However, for new technologies such as autonomous driving, standards, standards, certifications and licenses are often newly established even in advanced global countries. It is difficult for startups to secure expertise such as information and experience to acquire it. Director of the Korea Institute of Startup & Entrepreneurship Development Kim Yong-moon said, “I fully understand the difficulties experienced by high-tech startups in the product and service phase. We will support them so that they can acquire them smoothly,” he said.